Now that you’ve had a C++ refresher, it’s time to get a grasp on the basics of Cocos2d-X.

In this chapter, we will be learning how to create a scene, load a sprite and drag it around via touch control (or mouse control in the case of Windows, Mac or Linux platforms). It’s simple stuff and I’m sure you’ll get the hang of it quickly.

To follow along, please get the source code and project files for SpriteDraggerX. It's a minimal Cocos2d-X project showing how to drag a sprite around the screen.

SpriteDraggerX uses RapidGame's prebuilt Cocos2D-X libraries. Make sure you have Node and Git, then:

This will symlink a lib folder to RapidGame's prebuilt headers and libraries. You'll then be able to compile and run SpriteDraggerX. 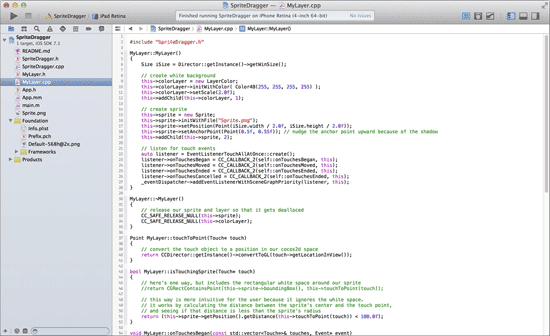 The SpriteDraggerX project opened in Xcode

Open up the project's SpriteDragger.xcodeproj file. This project is intended to be the simplest possible Cocos2d-X code, so there are no extraneous files whatsoever. 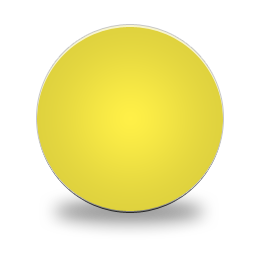 The sprite we will be dragging around

Make sure you've run the setup instructions above to create the proper lib folder symlink, then click Xcode's Run button and test out the project.

Drag the sprite around the screen. When you drop it, a little scaling animation will be played. 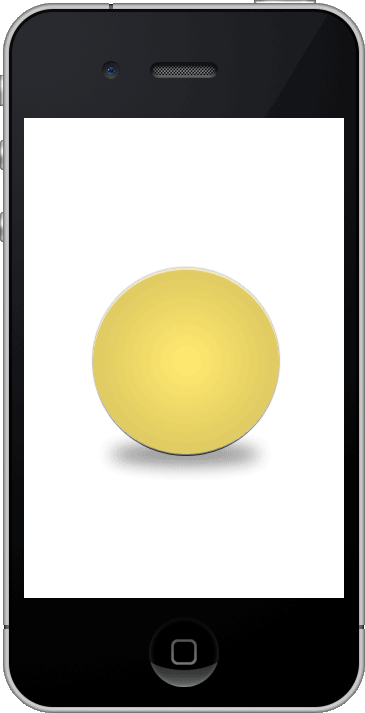 A delegate is simply an object which implements a few known methods. In Objective C, they are written using protocols. In C++, they are pure virtual classes.

In the case of an iOS app delegate, the first and most important method to implement is called applicationDidFinishLaunching. It is called when (obviously) the application has finished launching. This is where your app takes control and goes about its purpose.

SpriteDraggerX's app delegate is contained in App.h and App.mm. Give these files a skim. You'll see that the app delegate sets up the window, the OpenGL view and Cocos2d-X in the setupGraphics method.

After the graphics are set up, it runs the shared Application, which happens to be the SpriteDragger object contained in SpriteDragger.h/.cpp.

The SpriteDragger object simply creates a blank Scene and then adds a MyLayer (subclass of Layer) object as a child.

So what are scenes and layers?

Scenes define different modes of your game. You might have a main menu in one scene and the actual game in another. Cocos2d-X makes it really easy to run, swap, push, pop and transition between scenes.

Every Cocos2d-X app needs at least one scene. As we've already covered, SpriteDraggerX's scene is created in SpriteDragger.cpp.

Scenes are invisible nodes in Cocos2d-X. You can't actually see a scene, but you can see most of its children, like sprites, buttons, backgrounds, etc. 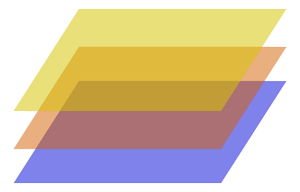 Layers are another type of invisible Cocos2d-X node. You can have multiple layers in a scene, though for the most part you'll only need one layer.

Are you familiar with the concept of layers in graphic editing software such as Photoshop? Layer objects stack together in a similar way, like sheets of glass. The highest z order is on top.

Layers, as well as scenes, sprites and everything else in Cocos2d-X, derive from Node.

Nodes give every element in Cocos2d-X a common functionality. All nodes have a position, for example, which can be set in order to move the node. Nodes also have anchor points, cameras, z order, rotation, scaling, flipping, skewing and basic on/off visibility. 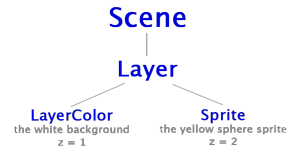 A node has one possible parent and many possible children. This organizes all Cocos2d-X elements into a hierarchy. The scene is at the top of the hierarchy, then comes the layer, then sprites, backgrounds, etc.

Since a node's position is relative to its parent, moving a parent node (such as a layer) moves all of the children nodes as well. This helps to simplify the mathematics for your game. A complex system can be thought of in smaller, more simple chunks.

You can think of nodes like the leaves, branches, and root of a tree. The root is a scene. The branches and leaves are layers and nodes.

Getting back to the MyLayer object created by SpriteDragger, we have the following code in the constructor:

The white background color layer is created and added with a z order of 1. This puts the background low in the z order.

The sprite (our beloved yellow sphere) is then created and positioned in the middle of the screen. It is given a z order of 2 so that it is higher than the background.

Last, an event listener is created to handle touch events. The "all at once" event listener type accepts any number of touches simultaneously and triggers the specified callbacks.

The sprite is also given an anchor point which nudges the sprite upward.

You can think of an anchor point like the nail which sticks a piece of rectangular wood onto a wall. After nailing the rectangle to the wall, you can spin it around on the nail. Imagine moving the nail to a different position within the wood. You can still rotate the rectangle, but it will rotate around a different center point.

Each one of your nodes is like a piece of rectangular wood and the anchor points are the nails which stick them to the wall. In the below graphic, the green dots are the nails and the guy in the suit is the piece of wood. 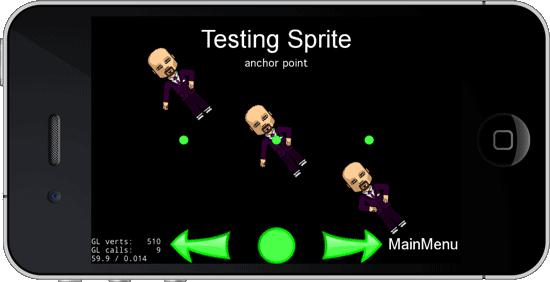 Nudging the anchor point also enables our touch math (which involves the radius of the sphere) to work flawlessly.

You’ll notice that you can only tap the circular part of the sprite to drag it. Tapping the white space around the sprite does not allow you to drag, even though there are transparent pixels in Sprite.png that are technically being tapped.

MyLayer's isTouchingSprite() function simply calculates the distance between the touch point and the sprite's position and treats that distance like a radius. If the radius is less than 100 pixels then the sprite is being touched.

When you let go of the sprite, you’ll see it animates a little bit by growing and shrinking. We accomplish this with Cocos2D-X actions.

Actions are an easy way to kick off a bunch of transformations, animations or events. Because Cocos2d-X handles all the timing and updating of the action, it is completely hassle-free. You just run the action and forget all about it.

Here’s the code that animates our sprite when the touch is ended:

So by now you have a pretty good understanding of the basics of Cocos2d-X, including scenes, layers, nodes, sprites, touch input and actions. If you'd like to learn more, here's a few good references:

Keep in mind that you can use the SpriteDraggerX project as a template for your own Cocos2d app. Just copy and paste the whole project directory, then start renaming.