In this chapter we'll discuss how to create your own Cocos2d-X project files from scratch for iOS, Mac, Android and Windows.

You can skip this chapter if using RapidGame. Here's how easy it is to create a new game (Node.js and Git are required) using prebuilt cocos2dx libraries so you never have to compile cocos2d-x twice:

From here on we'll be showing you how to create a new project with cocos2d-x with all the source files ready to be compiled.

First of all, you'll need to download Cocos2d-X. This tutorial is written for version 3. There's also an older version of this chapter maintained for version 2.

The iOS and Mac sections assert that you have a Mac computer and have already installed a stable release of Xcode. Xcode is a free development environment by Apple and much preferred by many a developer.

The Windows section asserts that you have a genuine copy of Windows with Visual Studio installed. You can accomplish this setup on a regular PC or use a Mac computer with Boot Camp.

The Android section asserts that you have already installed the Android SDK (which includes Eclipse) and NDK. Make sure to install the latest platform-tools, build-tools and API from the Android SDK Manager. With this setup, you can build for Android on Windows, Mac or Linux.

Keep in mind that Xcode, Visual Studio, Eclipse and even Cocos2d-X are updated often. There are new options, build settings and sometimes UI elements have been rearranged. If you run into any problems, please let us know how you solved them in the comments.

According to a recent survey we took, iOS is the most popular deployment target for Cocos2d-X developers, with Android coming in a close second. So that's where we'll start.

There's now a very simple way to create a Cocos2d-X iOS project from scratch. Just open Terminal, change to your cocos2d-x directory and run the command to create a new multi-platform project:

We use the cpp language option here to create a C++ project. You can also create lua and javascript projects.

You've now got a brand-new, multi-platform game project called "MyGame" on your Desktop.

Open up ~/Desktop/MyGame/proj.ios_mac/MyGame.xcodeproj. Select "MyGame iOS" from the scheme dropdown (it might say "build-all-libs Mac" initially) and hit the Run button to check out Cocos2d-X's HelloWorld app. 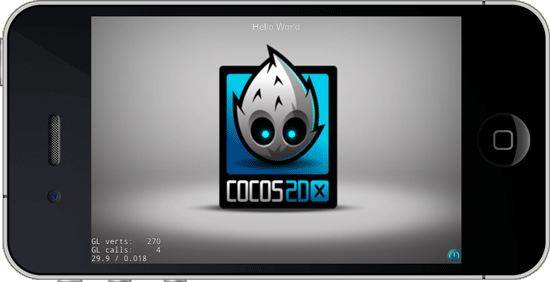 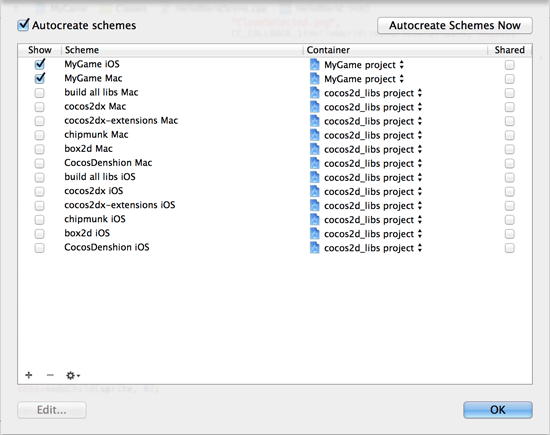 Alternatively, you can just remove the unwanted schemes by selecting them and clicking the "-" minus button.

Let's take a look at the project behind the scenes. It's actually quite elegant.

First of all, Cocos2d-X is included as a sub-project. It makes available many different targets that can be built and included in your game. These include the cocos2dx library for iOS & Mac, the CocosDenshion sound engine for iOS & Mac, the Box2d & Chipmunk physics engines, and many other libraries.

These libraries are included in the MyGame project as dependencies and the resulting library files are linked into the binary. View this for yourself by clicking MyGame from the project drawer and then clicking Build Phases. 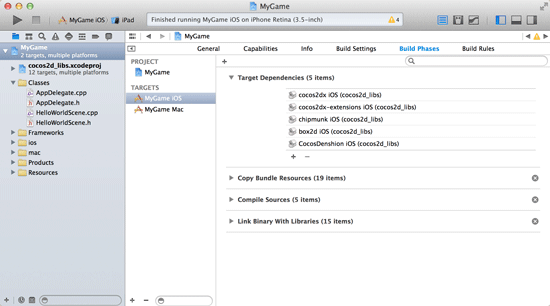 Building a project this way makes upgrading a snap. Since all the libraries are included as a single sub-project, when Cocos2d-X is upgraded the MyGame project does not have to be edited. Just copy the new Cocos2d-X into MyGame/cocos2d and that's it. 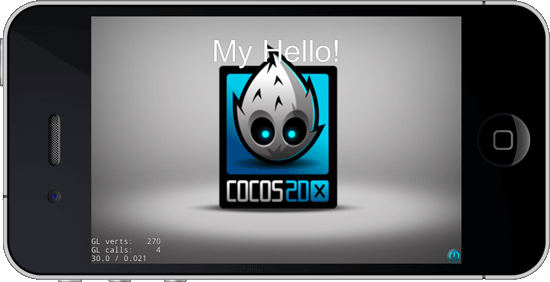 The label now says "My Hello!" instead of "Hello World" and it's much bigger. You've successfully proven the project is your own.

One of the best parts about creating a meta-project like this is that it re-uses the same game source code for each platform. Because we changed that one line of code to "My Hello!" it will be applied to every other platform we build for. This is where Cocos2d-X really shines.

The Mac project is already a part of the iOS project that we've been working on. Just select "MyGame Mac" from the schemes dropdown and Build & Run. After it builds all of Cocos2d-X for Mac you'll see your "My Hello!" customization. 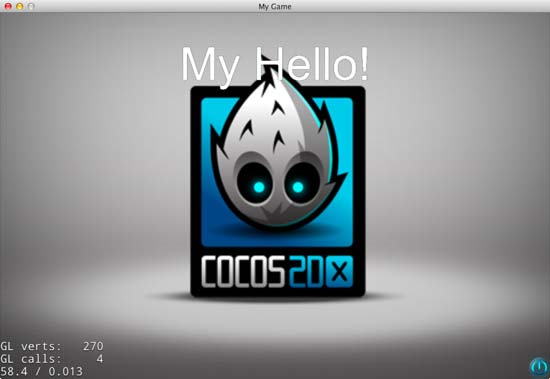 Once again the meta-project comes in real handy. We already have an Android command-line project that we can customize in the proj.android folder.

You can see which Android API version it's targeted for in the project.properties file. Example:

This is the API version that will be built against (similar to the Base SDK in Xcode). Make sure you have installed this API version from the Android SDK Manager.

Your Android game can still run using earlier API versions, as specified in the AndroidManifest.xml file (similar to the Deployment Target in Xcode):

The proj.android folder is mostly ready to go. We just need to add a makefile for convenience. Open Terminal, switch to your MyGame/proj.android directory, and create this makefile (or just download it):

Important: make sure to change the /Path/to/your/android/sdk on line 4 to match the path where you installed your Android SDK.

Now, while still in the proj.android directory, you can just run the make command to start building your Android APK file:

When the make command is done, you'll have MyGame-debug.apk ready in the bin subfolder.

Because it's a bit tricky to get OpenGL ES 2.0 (used by Cocos2d-X) to work in the Android Emulator, I recommend attaching a real Android device via USB and running it that way.

Once you've attached your Android device via USB, just run the make run command, then tap on the MyGame app to run it. Here's a screenshot of it running on my Samsung Galaxy S: 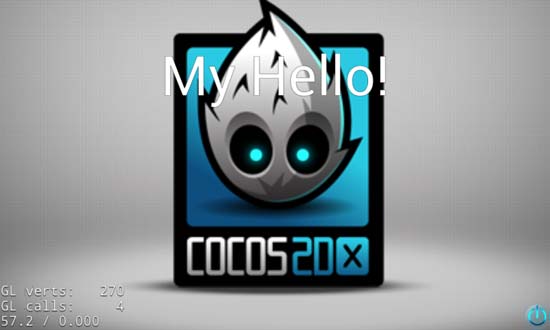 Open up Eclipse and make sure you've got all the Android and C++ plugins installed. If you need some guidance getting Eclipse set up correctly, here's a great tutorial. 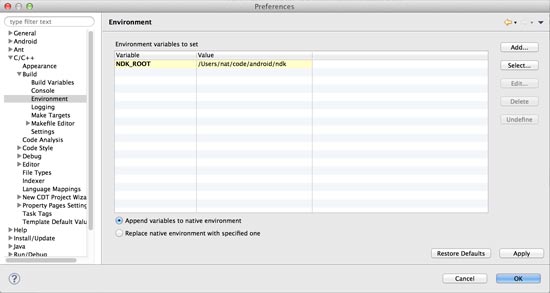 Next, choose your MyGame/proj.android folder with the Browse... button, make sure your project is selected and click Finish. 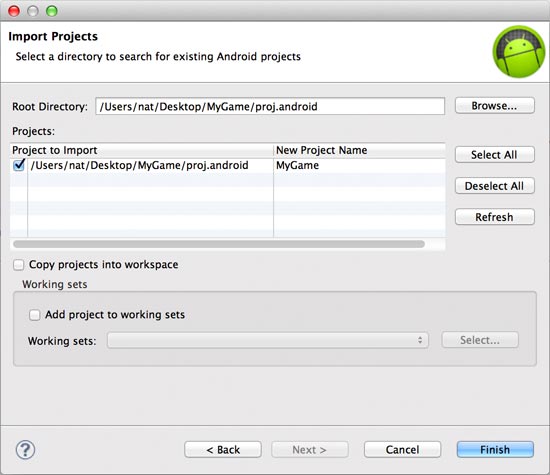 Last, repeat the same process to add an Android project from existing code and this time choose the MyGame/cocos2d/cocos/platform/android/java folder. 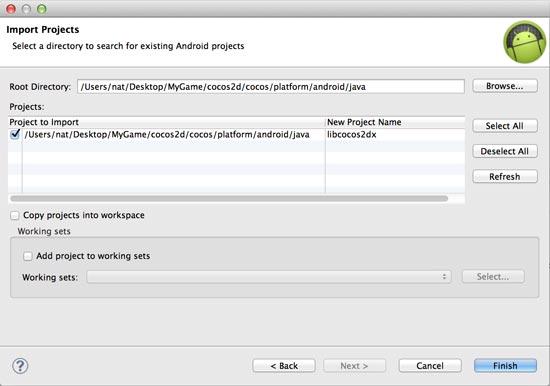 There you go. You've got a link to MyGame and libcocos2dx in the Package Explorer. Attach your device, select the MyGame project, then click the green Play button and Run As > Android Application.

If you get errors about @Override and "The method ___ must override a superclass method" then you've got to change your Java compiler compliance level to 1.6. Open Eclipse' preferences to Java > Compiler and select 1.6. Then click "Configure Project Specific Settings..." and do the same for your project.

The first step here is to get the MyGame project onto a Windows system. Once you've done that, open up Visual C++ with MyGame/proj.win32/MyGame.sln. Next, click the green Play icon to Build and Start Debugging. 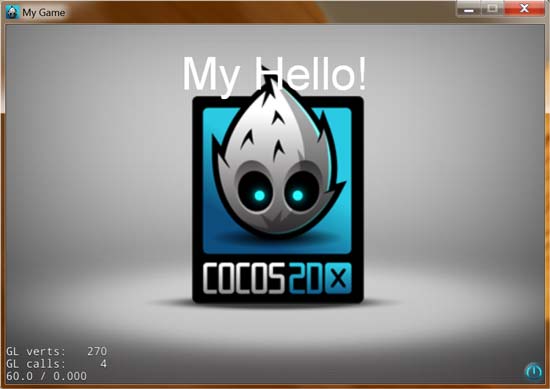 By now you've gone through creating a Cocos2d-X meta-project that builds and runs on iOS, Mac, Android and Windows. Congratulations.

The exciting part about it all is that the same file, HelloWorldScene.cpp, drives most of the content for this little app. Changing that one line from saying "Hello World" to "My Hello!" worked on all those platforms without any further edits.

That's all for this chapter.